According to reports published last year, Digital India represents a $1 Trillion opportunity to grow the economy through digital transformation, with the ability to sustain 55-60 million jobs. 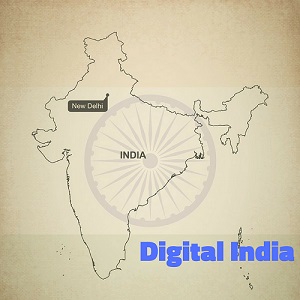 The statistics below show the scale of India’s digital economy, and the massive opportunity for business and economic growth through digital transformation.

A new report by IBM and Kalaari Capital notes that the number of Internet users is expected to increase from the current 450 million to 850 million by 2022.

During this same period, use of mobile phones will spread from 65% to 90% of the country’s 1.32 billion population.

After the Digital India statistics, we’ll look at some stats for the Cashless India framework, and the cashless payment apps that are leading the charge of this movement towards a cash-free digital economy.

Digital India by the Numbers

Core component of the Digital India programme, the Cashless India initiative was created with a vision of transforming India into “a digitally empowered society and knowledge economy.” Finance Minister Arun Jaitley has said in his budget speech that the government has a target of 2,500 crore digital transactions for this fiscal year. Total payments via digital instruments are expected to hit $500 billion by 2020.

Under UPI, each bank is now able to provide it’s own mobile app for banking customers, under which they can combine multiple bank accounts, services, funds transfer and merchant payments.

AEPS allows online interoperable financial transaction at the Point of Sale or micro ATM, and this is what is enabling individuals and small businesses to go cashless and accept payments online and by card. The transaction can be done Aadhar to Aadhar, or as a cash withdrawal or deposit.

Some stats about India’s cashless economy, which is still only at 5% of the total transactions.

But it’s not the cards and PoS machines that are now driving the digital transactions. It’s the cashless payment apps that have seen huge surge in adoption following demonetisation.

Aadharpay – Merchant version of AEPS. Merchant simply has to download the Aadhar Pay app and connect biometric scan machine to it on their smartphone.

There’s $1 trillion in digital growth in the works, and it’s only just beginning to flow through these apps. The real impact will be felt when small business India goes digital – when the retail stores and restaurants and markets (kirana, hotel and vegetable markets) and other daily use FMCG businesses, the plumbers and electricians and all the service providers who operate in cash – when all of them start going digital – Aadhar to Aadhar.